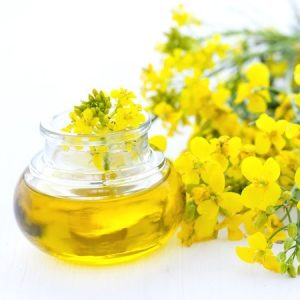 In the last 5-10 years canola oil has practically taken over as the food processing industry’s oil of choice. One can hardly find granola in a health food store without Canola Oil as an ingredient. The same is true for salad dressings and snack foods. Why is this? Is it so superior in health qualities to say, extra virgin, cold pressed Olive Oil? Not on your life – all the natural health pundits will point to any number of alternatives but never praise Canola as health promoting.

OK. So, if there are actual health reasons not to use it, then why is it so widely found throughout the processed food industry?

Answer, according to Jim Lynn: “It is very inexpensive to grow and harvest. Insects won’t eat it.”

In an article he wrote, Jim says, “Canola oil was first developed in Canada. It’s proponents claim that due to genetic engineering and irradiation, it is no longer rape oil, but “canola” (Canadian oil). They also claim it is completely safe, pointing to it’s unsaturated structure and digestibility. Although I could not verify it, it is claimed that the Canadian government paid the FDA the sum of $50 million dollars to have canola oil placed on the GRAS list (Generally Recognized As Safe). However it was done, a new industry was created.”

In a very level-headed treatment of the subject of canola, The Transformation of Rapeseed into Canola – A Cinderella, author Amy McInnis cited that, “In order for rapeseed to be used as an edible oil in western societies it was necessary to lower the concentration of erucic acid in the oil, which was suggested to be a health hazard after studies were conducted on several species of animals. In addition, the meal produced after extracting the oil in rapeseed contained large amounts of glucosinates (the substances responsible for the hotness in mustard). These sulphur compounds have a negative effect on the thyroid and act as growth inhibitors, and are therefore of no use as animal feed (Kneen 1992)…. ”  Furthermore, “In 1986, the trademark canola was legally amended to apply only to varieties yielding oil with less than 2% erucic acid, and meal with less than 30 micromoles per gram of glucosinates.”

Obviously the Canadian and U.S. government, the cultivators, processors, and distributors of Canola Oil can all live happily with the established levels of erucic acid and glucosinates, but the big question is how much the consumer is adversely effected by these factors. John Thomas has published a book Blindness, Mad Cow Disease and Canola Oil. In it, he states that, “Alcohols and glycosides in canola and soy oils shut down our protective grid – the immune system. Fluoride, immunizations, antibiotics and bio-junk food play a similar role in immune system collapse. An alcohol is a chemistry term for the “reactive” chemical group on an organic molecule. Those “R” groups are what make organic compounds work – for good and bad! Canola alcohols and glycosides are very reactive. They are as toxic as fermented alcohols, but their effects manifest differently. The damage takes years to show up.”  This assessment in itself should be enough to cause alarm, but a quick search around the internet yields scary results.  Here’s some excerpts I pulled form a couple sources:

We hope these brief quotes from articles available on the Web will interest you in doing a much more thorough investigation of your own into the health effects of consuming Canola Oil.

Pure organic, virgin, unprocessed Olive Oil can be used for low heat cooking, for dressing salads and other foods after they are cooked. This form of oil will keep for quite a long time at room temperature. For high heat cooking, virgin coconut oil is superior. It can also be used in smoothies or to flavor anything. Butter is also an excellent choice, providing short chain fatty acids and great flavor. These monounsaturated and saturated fats are stable and healthiest for you, contrary to their earlier maligning in favor of margarine and polyunsaturated fats that go rancid in their processing.

If you want oil with your food, you don’t necessarily have to cook in it either. You could cook the food without oil first, steaming or baking it, then add oil afterward. Avoid margarine and other hydrogenated fats. Studies have shown these actually INCREASE cardiovascular disease. Believe it or not, real butter is far more healthy than margarine. We hope you will take action with this information and create better health for yourself and others in your life. Remember: It’s your life, your health, and your choice!

For more information on other common dangers to your health that you may not be aware of check out our Warning Page for more articles.