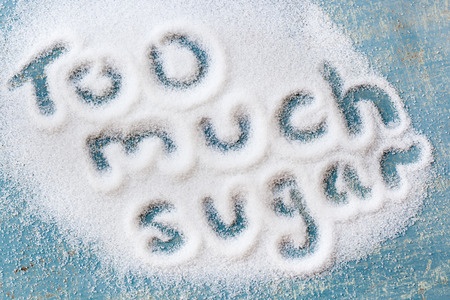 Is Sugar to blame for how you feel?

Yes, sugar is often primarily to blame for the lack of energy, hunger, stupor, illnesses, and pain.  We, unfortunately, have  gradually acclimated ourselves, to having low energy and pain. We accept it as normal and for a quick fix we take medicine or over-the-counter drugs, rather than looking for the real answers, like detoxifying foods and herbal solutions. Our society is addicted to sugar; it slowly and silently crept up on us.

How much sugar is in your food and drink?

Here is the truth. Remember that one teaspoon of granulated white sugar is equal to 4.2 grams. For comparison, there are 42 grams of sugar in a can of coke. That comes to 10 teaspoons of sugar per can of coke.

100% fruit juice is a very concentrated source of fructose (naturally occurring fruit sugar). Fruit drinks, on the other hand, are often packaged and marketed to look like “wholesome” fruit juice but are mostly a mixture of added sugar and water. While 100% fruit juice does contain some vitamins and minerals, fruit drinks usually don’t. To avoid these hidden sugars, read the ingredients label. Anything other than “100% fruit juice” is likely to include added sweeteners.

Yogurt might be synonymous with “health food” for many, it’s a great source of protein, calcium, and cultures–but unless you’re buying “plain” yogurt, that dose of dairy may contain 20 grams of added sugar or more!

Sure, the bulk of a pasta sauce’s ingredients are tomatoes and other veggies, but did you know that various forms of sugar (or corn syrup) are often added to your favorite red sauce? Manufacturers add sweeteners to tomato-based sauces to help cut down on the acidity of the tomatoes for a more widely appealing taste. But not all spaghetti sauces are created equal–some brands have 2-3 times the sugar of others!

Many people turn to sports drinks during the hot summer months to stay hydrated or replace lost electrolytes from sweating. There are definitely some situations in which sports drinks are warranted: running a marathon or prolonged athletic training, to name a couple. Going for a brisk walk or a leisurely bike ride on a hot summer day is not one of these situations. Sports drinks pack in as much sugar as soda and essentially contribute empty calories that wreak havoc on our blood sugar and waistlines.

Chocolate milk and other flavored milk get their sweetness from 6 grams of added sugar.

Black coffee by itself is naturally sugar-free, but some flavored coffee drinks can pack more than 60 grams per 16-ounce serving. When shopping for your morning cup of Joe, avoid flavored or mixed coffee drinks that add in the sweeteners, flavored syrups, whipped (sweetened) creams, and other sweeteners.

One of America’s favorite condiments, this seemingly innocent tomato-based sauce can pack as much as 6 grams of added sugar in a single ounce. High fructose corn syrup is usually added to ketchup to give it its sweet and savory flavor.

Like coffee, tea is naturally sugar-free. However, in some regions, tea comes sweetened with (lots of) sugar unless you specifically ask for unsweetened tea. This added sugar can rack up to over 48 grams for 16 ounces of tea.

Oatmeal has long been praised as a healthy breakfast of whole grains and fiber, which may help to lower cholesterol, regulate blood sugar, aid in weight loss, and keep you full.  While oats themselves are free of added sugar, the instant, flavored oatmeal that you buy in individual packages have 10-12 grams of sugar per packet. We have to read labels.

Protein bars certainly sound healthy and many people choose them as an afternoon snack, post-workout recovery meal, or on-the-go meal replacement. Of course, these bars run the gamut when it comes to actual ingredients and nutrition profile, but one thing is for sure: They tend to be heavily sweetened. While they may have some protein, most of these bars have enough sugar to make a candy bar look like health food.

Coleslaw can vary widely in its added sugar content, depending on the ingredients used. Some recipes actually call for adding up to one full cup of sugar…

These mimic the flavor of sugar with virtually no useful energy. There are five dangerous sugar substitutes approved for consumer use: saccharin, neotame, acesulfame potassium, aspartame, and sucralose. Of these, the really dangerous ones are sucralose and aspartame. While they are not generically sugar, they are chemically created artificial substances to replace it. There is a lot of talk about them. What is true?

Sucralose is marketed under the name Splenda. To make it, they chlorinate sucrose, changing the structure of sugar molecules in it. Yes, I said “chlorinate,” adding chlorine atoms. Chlorine is a known carcinogen. Even so it has been approved by the FDA in 1999 for human consumption there are recently concerns about it’s safety.

Aspartame is marketed under the names Equal and Nutrasweet. There are over 6000 products using it, including yogurt, sodas, pudding, tabletop sugar substitutes, chewing gum, to name a few. Searle Company falsified reports of its danger, and lawsuits were delayed by clever legal maneuvering. When the statute of limitations ran out and the product was up again for the review, many discrepancies came to light between reported and actual findings.

How toxic is it? Flying Safety, an official United States Air Force publication reported that US Air Force pilots were warned not to consume Aspartame in any amounts at all. Why? Because it is being investigated for having caused brain tumors, mental retardation, birth defects, epilepsy, Parkinson’s Disease, Fibromyalgia, and Diabetes. The FDA has made no move to regulate this toxic substance.

Saccharine: Sweet and Low, Some reported side effects, for those with sulfa allergies, saccharin may cause nausea, diarrhea, skin problems or other allergy-related symptoms. Some concerns are: Early safety studies of saccharin caused bladder cancer in rats. The FDA recently lifted the requirement that saccharin is labeled as a probable carcinogen on food packaging. On the birth of Aspartame, there was a war between the two and Aspartame out-politicked saccharin, which had been investigated more than any other sweetener, and saccharin lost. To date, there is no connection between saccharin and bladder cancer in humans. Aspartame just ran roughshod over saccharin back in the eighties when Aspartame backers used every tool they had to destroy saccharin so Aspartame could take a foothold in the sweetener business.

Acesulfame Potassium is found in many products in protein powders and “reduced-sugar products.” These sweeteners have reduced calories but there is evidence they promote hunger, just as sugar and HFCS do in suppressing the hormone that tells you have had enough to eat. They cause headaches, weight gain, and more cravings, gastrointestinal problems, toxicity to liver and kidneys.

Dr. Oz says Aspartame and Sucralose create what is called metabolic syndrome. Metabolic syndrome is a combination of factors that multiply a person’s risk for heart disease, diabetes, and stroke. Almost 35% of American adults are affected, which is now epidemic, causing high blood pressure, excess belly fat and insulin resistance. Natural health solutions would solve many of these problems in short order.

Truvia: This is NOT stevia-based as marketed. The name Truvia suggests truth, but it is just the opposite, it is a lie. The ingredients are Erythritol, Rebiana and Natural Flavors. 99.95% of Erythritol is a sugar alcohol made by processing genetically modified (GMO)) corn, the rest is Rebiana, a laboratory-produced extract of one-half of 1% of the Stevia plant, just enough to say it is a stevia product. Truvia is just another product, which  mainly consists of  sugar alcohol made from GMO corn!

Xylitol is another favorite of the food industry.  It is made primarily from GMO corn. Commercially available xylitol is produced by the industrialized process of sugar hydrogenation. In order to hydrogenate anything, a catalyst is needed, and in this case, Raney nickel is used which is a powdered nickel-aluminum alloy.

On being asked if he considered Xylitol a “natural product”, Shane Ellison, Organic Chemist, says: “I don’t consider anything natural if it’s processed with man-made chemicals.” He said, “Xylitol will rip up your insides, namely the digestive tract. It’s being touted as a natural product, most likely so that it can bypass regulation. Thus, very little studies exist on its side effects.” He further said it is a “Franken-chemical.”

What is a good sweetener?

Fresh fruit of all sorts makes the best sweeteners to add to your food, snack, drink. Dates are also often used.

The only truly raw and unprocessed plant-based sweetener on the market is Stevia, a natural product made of leaves of a South American plant that is 400% sweeter than sugar. It has all of the good sweetening properties that provide a sweet taste with none of the dire effects caused by any of the others. Sweetleaf Stevia is the only product that has pure stevia at this writing. Check the ingredients of other “stevia” products, and you will see they have other sweeteners in them. There are many products calling themselves stevia when they are actually sweetened by other sugar alcohol-based chemicals such as maltitol, sorbitol, isomalt, and xylitol. When you see these in the ingredients, you know you are still looking at sugar. For example, the ingredients of some of these fake stevia products contain maltitol which has high glycemic qualities and causes major intestinal difficulties.

Unprocessed stevia, the green or brown leaf or liquid  retains the healthy properties of the plant: it feeds the pancreas, and actually aids in keeping blood sugar balanced.

Finally, unheated, unfiltered pure raw honey, like Stakich Raw Honey,  is unprocessed, not blended with syrups as most commercial honey is to get the water content specified by the FDA.–>
How can you avoid sugar? It’s easy to say “stop eating it”, which is true but sugars are hidden in many packaged food products. To avoid sugars and their artificial counterparts, start reading labels!

Even more, start eating whole unprocessed nutritious foods. Once you switch over and your body get used to getting real nutrition, you will find your taste buds change and you  the sugar-laden foods you used to eat don’t even taste good anymore!

Eat foods that give you sustained energy, detoxifying foods, exercise, drinking lots of water, and discovering herbal nutrition will help you find your way back from sugar addiction.