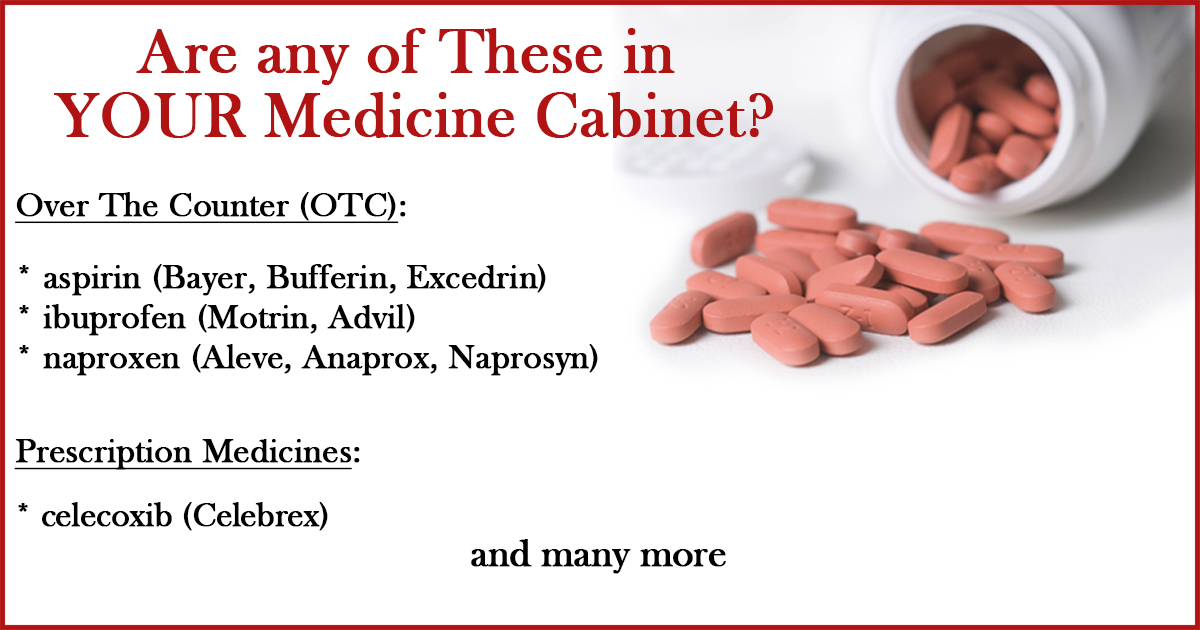 How many people do you know complain of back pain, knee pain, aches from old sports injuries or just overdoing it on occasion? It’s common practice for most people to reach for an over-the-counter-pain reliever.

It’s equally common for health care providers to prescribe Non-Steroidal Anti-Inflammatory Drugs, or NSAIDs for short, to be used long-term and daily. These are sometimes prescribed even for other conditions like the ‘daily aspirin therapy’ for heart attack prevention that many people just accept as the norm as they grow older. NSAIDs are also often used or prescribed for menstrual cramps, headaches, colds and the flu.

I bet you could name at least 3 NSAIDs right off the top of your head. I can: ibuprofen, naproxen and aspirin are the most common. Considering there are so many common painful discomforts we want to avoid, a person may not take into account the number of doses consumed in any given day/week/month and their cumulative effect.

It’s even more rare to actually stop to consider the potential health risks that may accompany these pain relievers. After all, if it was that dangerous why would they sell it on every drugstore shelf? Why would my doctor prescribe a daily dose to me and not warn me if there were potential risks involved? Surely if the FDA approved it, it can’t be that big a deal…

That’s where we would all be wrong. Studies have shown on multiple occasions that there can be serious and potentially deadly health risks to taking these types of pain killers. According to the New England Journal of Medicine:

“If deaths from gastrointestinal toxic effects from NSAIDs were tabulated separately from the National Vital Statistics reports, these effects would constitute the 15th most common cause of death in the US. Yet these toxic effects remain mainly a “silent epidemic” with many physicians and most patients unaware of the magnitude of the problem.”

This is not the only published finding of these effects. A quick search around the internet will show you that from Harvard Health to Mayo Clinic there are warnings about the potential health risks of long term use which is defined as 3 days for fever and 10 days for pain.

The FDA itself even issued this update to its warnings in 2015:

“Based on our review and the advisory committees’ recommendations, the prescription NSAID labels will be revised to reflect the following information:

Even though medical doctors often suggest acetaminophen for aches and pains associated with the flu, there is evidence that they can actually make your illness worse and easier to spread to others.

A double-blind, placebo-controlled study published in the Journal of Infectious Diseases, determined that when they infected participants with a flu virus and then treated them with aspirin, acetaminophen, ibuprofen or placebo, the aspirin and acetaminophen groups had a longer duration virus shedding than the other groups. The aspirin and acetaminophen actually made the patients contagious for a longer period of time than they would otherwise have been.   –view abstract here

These are something to be aware of regards these anti-inflammatory pain pills. Vitamins, herbs and natural remedies are becoming more frequently asked about for a reason, as people are growing disenchanted with the “side effects” of many pharmaceuticals. Nutrition is not taught in medical schools, but changing your diet and improving your lifestyle may make your life easier and help you to stay healthy!