I used to absolutely love McDonald’s French fries. Whether it was the salt they used or the type of oil, I will never know; but what I do know is that every time I ate them, I always wanted more. Even if I got a burger somewhere else, I would still swing by McDonald’s on the way to get my fries.

I later learned that part of their magic formula involves a strict insistence that only 3 specific kinds of potato be used because these produce such an enticing display in the iconic red french fry boxes. You know what I mean, the bright red box with the long slender perfectly shaped French fries, no stubby, short little weird looking fry pieces in those boxes!

In order to get such perfect potatoes, certain growing and processing techniques also have to be followed. Which leads me to one of the biggest reasons I will never touch another McDonald’s fry again and why I think you should reconsider ever eating them as well? Darker than the artery clogging fat content, even more sinister than the blood pressure-increasing salt content, and even more malignant than the havoc their high glycemic load can wreak on your blood sugar, is the fact that they are little more than tasty little sticks of literal poison.

I have known for some time that potatoes are consistently at the top of the Environmental Working Group’s Dirty Dozen for being one of the most pesticide-laden foods in our diet, but I really had no idea how far it went until I learned exactly how McDonald’s gets those perfect-looking fries, and how they could make sure their potatoes are blemish-free.

The answer is the pesticide Monitor. The thing to note with the pesticides used on our foods are that they are so strong there are EPA health requirements for the length of time that workers must stay out of a field after it is sprayed. For Monitor, this range is 4 to 5 days. Yes, the farmers cannot return to a sprayed field for 4 to 5 days because it is so toxic, but somehow it is ok for us to eat the foods produced with this stuff?  I’m thinking no.

On top of not being able to go into the fields, they often are required to store the potatoes for 6 weeks so that some of the pesticide residue can dissipate. Even after that, they still contain supposedly “safe” amounts of pesticides . . . though I highly doubt there is even an actual safe amount. There is still a lot we don’t know about the long term effects of most modern pesticides on the human body. Many of these pesticides bioaccumulate – they build up in our bodies over time and with frequency of ingestion. So a “little bit that is safe” here and there could still add up when multiple sources or servings are eaten in a day, month or year.

There are actually studies showing that the chemical that makes up Monitor, Methamidophos, can cause food poisoning, and in other tests proved to be genotoxic (damaging to genetic information) and mutagenic (increasing damage to DNA causing increased frequency of mutations which increases risk of occurrence of cancer).

Even after all that, McDonald’s still feels the need to process the heck out of the ingredients as they produce their final product. Do you think, as I once did, that your fries are the product of simple potatoes, salt and oil?  Think again! Besides potatoes, there are a number of other ingredients in those fries including “natural beef flavoring” made from hydrolyzed wheat and soy and 24 grams of fat in a large serving. So much for the vegan and vegetarian options! Ingredients include: 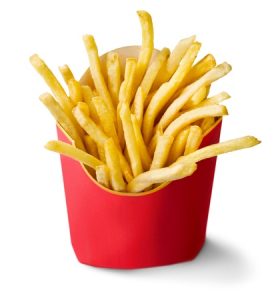 These additives, and the additional ingredients above, come with a whole host of health risks unique to themselves.

The processed food industry knows that with the careful layering of fat and salt (and often sugar) in most foods, it causes our bodies to become addicted to it. They don’t like to use the word “addicted” or “addiction,” but that’s what it is. Their code words are “snackability” and “craveability”, but in the end the results are the same. People become addicted to these foods because the creators of the foods engineered them that way. However, once you really look at the process, the health risks ranging from heart disease and high blood pressure from the product itself, to possible cancer risk due to the additives and pesticides, you realize processed foods and especially these fries are dangerous!

I urge all to consider: is that really worth it for a few moments of enjoyment? I, for one, am definitely not “loving it” or eating them again.