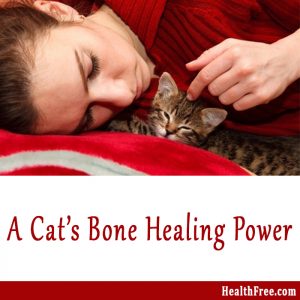 In the issue “Alternatives for the Health-Conscious Individual” by Dr. David Williams, he talks about some interesting research in vibrations. He says that researchers have found that vibrations or energy currents in the range of 20 to 50 Hz stimulate bone growth. The production of the body’s natural anti-inflammatory compounds is increased. Joint pain and swelling improve. Bone fractures heal faster, and weakened bones begin to strengthen and rebuild.

In a section he calls “A Purrfect Tool for Healing” he writes:

“Some of the most amazing research that I’ve run across, however, deals with cats. A group called the Fauna Communications Research Institute in Hillsborough, North Carolina recently started some very interesting research focusing on the possible connection between vibration frequencies and healing.

Researchers there began to question the purpose of purring in cats. I honestly hadn’t given it much thought; I always thought cats purred because they were content. Apparently, there’s more to the picture.”

Cats also purr when they give birth and when they are under stress, caged, or severely injured. Since purring expends energy, it makes sense that there would be a reason for it.

In an unpublished study, researchers recorded the purrs of all types of cats, both domestic and wild. Cheetahs, pumas, ocelots, and other wild cats were recorded at the Cincinnati Zoo. Various domestic cats were recorded elsewhere. Surprisingly, when the frequencies of the purrs were analyzed, it was discovered that the dominant frequency for three species of cats’ purrs was exactly 25 Hz or 50 Hz. These just happen to be the most effective frequencies for promoting bone growth and repair. (Only the cheetah didn’t have a dominant frequency at 50 Hz.) 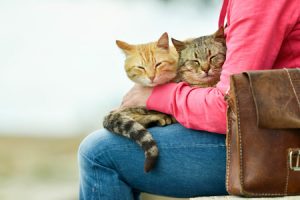 Everyone has heard that “a cat always lands on its feet.” The amazing righting ability behind this saying undoubtedly accounts for the fact that cats routinely survive and completely recover from falls that would kill most animals. In the late 1980’s, vets stupid the cases of 132 cats that had fallen an average of 5.5 stories from various high-rise apartments. Of those, 37% required emergency treatment, 30% required non-emergency treatment, and the remaining 30%, no treatment at all. Overall, 90% of the cats survived. (For what it’s worth, the highest recorded fall survived by a cat was 45 stories.)

Cats’ remarkable ability to survive may also be based on the fact that their dominant purr is at the exact frequency that heals bones, muscles, and ligaments. There’s another old saying that’s popular among veterinarians, “If you put a cat and a bunch of broken bones in the same room, the bones will heal.”

A recent study evaluated the various health problems presented by 31,484 dogs and 15,226 cats to 52 private veterinary clinics around the country. Lameness and disc disease were among the top problems of dogs and 2.4% were severely arthritic. Kidney and bladder problems were most prominent among cats, and there was no mention of bone, arthritis, or joint problems at all. (J Am Vet Med Assoc 99;214 (9):1336-41)

Hip dysplasia, arthritis, and ligament and muscle damage are all common to dogs, but almost non-existent in cats. Even myeloma, a cancerous tumor in bone marrow, is practically unheard of in cats, yet quite common in dogs. Any vet will tell you how much easier it is to fix a broken bone and how much quicker one heals in a cat compared to a dog.

Researchers at the Ontario Veterinary College in Canada made some interesting comparisons between dogs and cats regarding their complications from elective surgeries. They found that complications from castration were as much as 20 times higher in dogs than in cats, and the postoperative problems following ovariohysterectomies occurred twice as often in dogs as cats.

Purring appears to be a cat’s way of treating itself. Just like humans use shivering to warm the body, cats may purr at specific vibration frequencies that promote healing in various parts of their bodies. While the researchers in the above-mentioned unpublished study found that a cat’s dominant purring frequency might be at 25 Hz or 50 Hz, the range extended up to 140 Hz. By changing the frequency of their purring, cats may be fine-tuning their healing abilities.

In another section he writes:

“I’ve even seen reports where individuals claim they can stop their migraine headaches by lying down with a purring cat next to their head. Maybe we’re finally on track to discover a logical explanation for these incidents.”

What can you do for your cat? Read here!

Read more about our natural remedies